Mourning: In the Wake of Loss 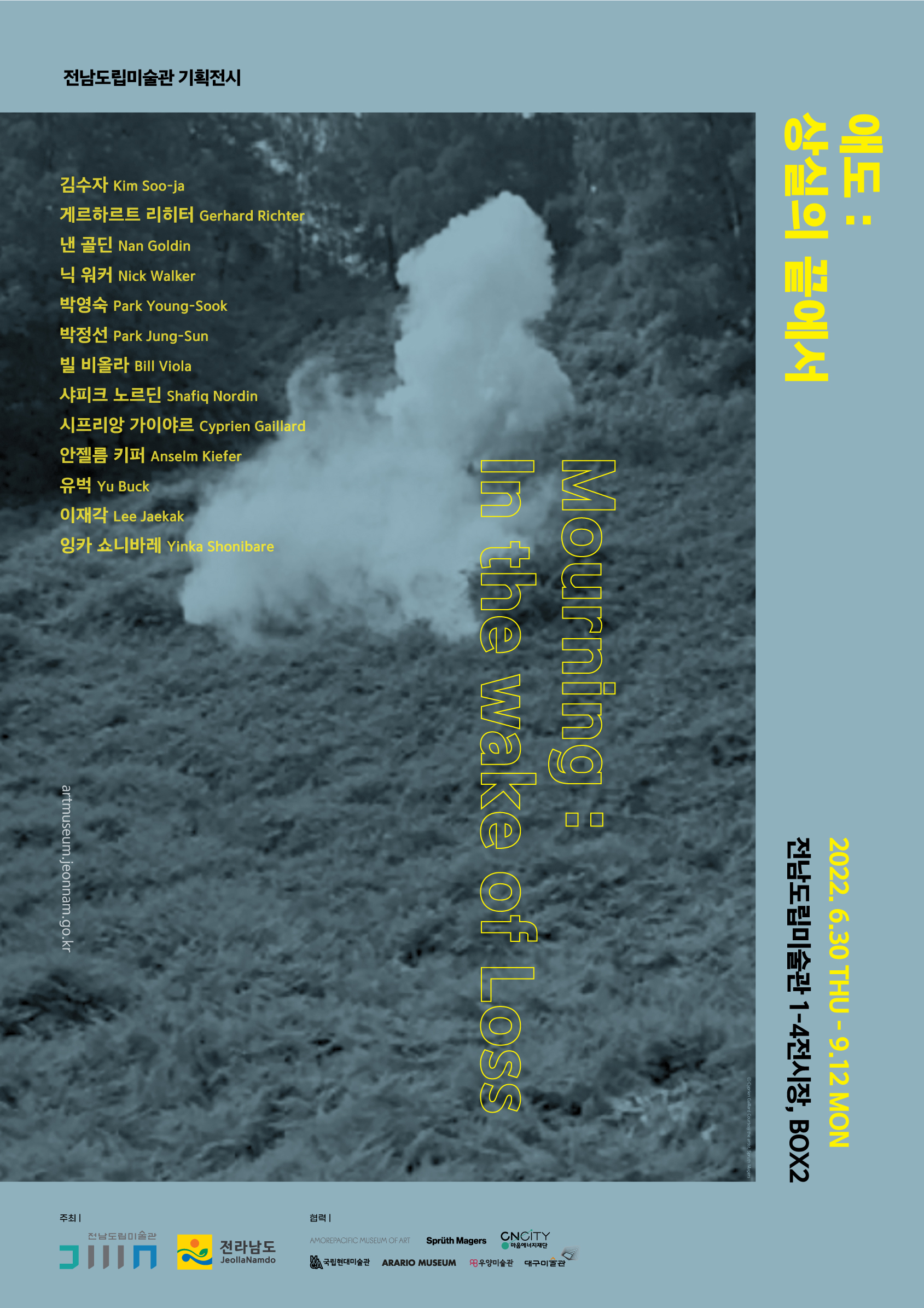 People have died or otherwise suffered from COVID-19, others have lost their homes due to forest fires hard to put out due to climate change, while others have been displaced during war—all of us are living during times of loss. The Jeonnam Museum of Art has prepared this exhibition to track the loss that pierces our hearts and the process of mourning. Traumatic experiences where past shocks continue to affect us in the present lead to a sublimation process to overcome mental anguish. The works presented in this exhibition are the results of such sublimation, exploring loss suffered and still lived by the artists who created these works.

Death is not the only form of loss. We suffer loss when we lose our homes for any of a variety of reasons; when the memories from childhood leave us and wander alone; and when the idealized version of oneself does not coincide with reality. This exhibition, Mourning: In the Wake of Loss, also divides loss into three themes: Me, estranged from childhood memories; loss of the home; and loss of a loved one. This is because the experience of loss is different for each individual and the way we recover from loss also varies by the kind of pain it causes, the personality of the one left behind, and that person’s past experiences. The visual representations in each work of art show the variety of approaches used by each artist to express loss and overcome the pain.

Loss is everywhere: parents watching their children grow up to eventually leave; children watching their parents grow old, sick, and pass on; each one of us watching our bodies, once young and healthy, gradually weaken and age day by day; and the sense of loss felt when people, ideas or things we used to long for or idealize disappoint us. These everyday moments are all losses. When people or things detach from our lives, we forever treasure our memories of and affection for them. It is a painful process, this mourning, as it requires truly accepting that the loss has occurred. Ironically by letting go of someone or something, the void we feel becomes a new space to fill with new people and things. As such, mourning opens the way for us to move on from the past and toward the future.

There are countless psychoanalytic and psychological interpretations related to the concepts of loss and mourning. A common theme among these theories, which have a very long history and continue today, is that the mourning process involves accepting that something or someone has been irrevocably lost and letting go and facing the unease one feels inside. This can also create a feeling of freedom and satisfaction from overcoming the worries and fears one by one, accepting that one is imperfect, and regaining a connection to others.
What is left at the end of a loss? What have you lost? What have you had an attachment to? What did you have to let go of? What did you fill the resulting void with? Is mourning about the past or about the future? Even if the works on view cannot answer all these questions, I hope that a close and careful look at the results of each artist dwelling on them will give you at least some form of “Eureka!” moment by the time you leave the exhibition.

Photography by Nan Goldin, born in Washington DC, the US in 1953, mostly features the American underground culture of the 1980s for drug addicts and members of the LGBTQIA community, as seen with an impassive eye. At the time, her photography was seen as documentative as if they were snapshots from very personal diaries. The people appearing in Goldin’s photos, who has surrounded herself with people holding a variety of identities since her childhood, bare the most private emotions they feel, and at the same time, expose their terrible loneliness. Her work presents them in their daily lives as they were, without revealing any resulting emotion towards the subjects, and expresses the truth that humans are inevitably alone even when together with others.

When she was only 11, Nan was traumatized by her older sister committing suicide, and when she was 14, she ran away from home. From around 16, she lived with drag queens and began photographing them. With the great loss of her sister on her mind, she captured her very private emotions and her own life, as fragile as it was, seemingly ready to come apart at any moment. In her work, she faces her life as it is, not afraid of the loneliness and not trying to avoid being alone.

Her Self-portrait features Brian, her boyfriend for three years in the past. In one photo, Nan and Brian are looking in different directions, probably at dusk judging from the orange-lit room. While Nan gazes vacantly at Brian, Brian is looking out the window and silently smoking. They are each withdrawn into their own loneliness, devoid of communication or attachment on the bed—a place of the greatest intimacy. Another photo shows her bruised face after a battering from Brian. Her work, plainly depicting injury after beautiful memories, is reminiscent of events, both great and small, that the viewer him or herself may have also experienced.

“Art cannot exist alone. It requires a greater scope of knowledge and embracing the scars of the world and of life.”

Born in Germany in 1945, Anselm Kiefer studied at art academies in Karlsruhe and Dusseldorf. His work deals with multi-layered themes like cultural memory and identity as a person born into a country with a long and complex history. He intentionally uses temporal, fragile materials like glass, straw, and wood to express finitude and ephemerality in his art. The landscapes featured in his work retain the wounds of history as scars and their ruined vistas suggest the cultural assets of Nazi Germany. Represented in his work are the pain every society experiences, and the lives and advances that continue despite everything.

The Morgenthau Plan was a proposal from US Secretary of the Treasury Henry Morgenthau Jr. at the Second Quebec Conference in 1944 to eliminate Germany's ability to wage war by destroying its arms and other industries key to military strength and converting Germany into an agrarian society. This was not adopted due to strong opposition in Europe, and in France in particular. Nonetheless, it seems that Kiefer imagined Germany as an agricultural nation, shining in golden hues, instead of the Germany in ruins following the Second World War. In 2012, he held an exhibition entitled Morgenthau Plan at the Gagosian Gallery in the UK, where the gallery was filled with a sculpture of a golden wheat field, enclosed within a five-meter-high steel cage. On display at the exhibition is a book version with 36 pages of cardboard, where the wheat field is rendered in gold leaf and silver gelatin emulsion. As they fill the cardboard sheets, the waving wheat field and surrounding landscape symbolize an alternative German history and new life that rises again after loss.

Yinka Shonibare is a British-Nigerian artist living in the UK. Colonial struggles in Africa are part of that continent’s history of exploitation and discrimination, and in this regard, the mix of things that are British, imperialistic, and colonial appearing in his work tells us many things.

Shonibare was born in London in 1962. When he was three, his family moved to Lagos, Nigeria. When he was 16, he returned to Britain with his lawyer parents and studied art. He came to see his identity as a postcolonial hybrid, the result of his shared upbringing between the UK and Nigeria. This view is reflected in his work, raising questions about Eurocentrism and racial discrimination, almost unnoticeable parts of daily life for the average Westerner. The questions he throws at society speak of what he has lost as an outsider growing up in a white society. His work expresses imperialism, colonialism and distorted historical views with humor and vibrant color.

The fabrics worn by the boy in the work are “Dutch wax,” which is a traditional African fabric. After having learned that the fabrics actually derived from batik, Indonesia’s traditional cotton fabrics, and were transplanted to mid-Western Africa by Western powers in the 19th century, Shonibare came to the painful realization that something he had believed had been part of the culture of his homeland actually arrived there via imperialism and colonialism. The fact the boy is wearing clothes with such a history is intuitively indicative of Africa’s experience and indirectly reveals that the winner’s history is built on others’ loss.

Two keywords essential to understanding Shonibare’s works are hybridism and dichotomy—the hybridism of cultures he has lived in and the dichotomy between the historical views of the strong and the weak. Faced by the personal and national history he had unknowingly rejected, he still hopes that the path the next generation takes will be beautiful and bright. 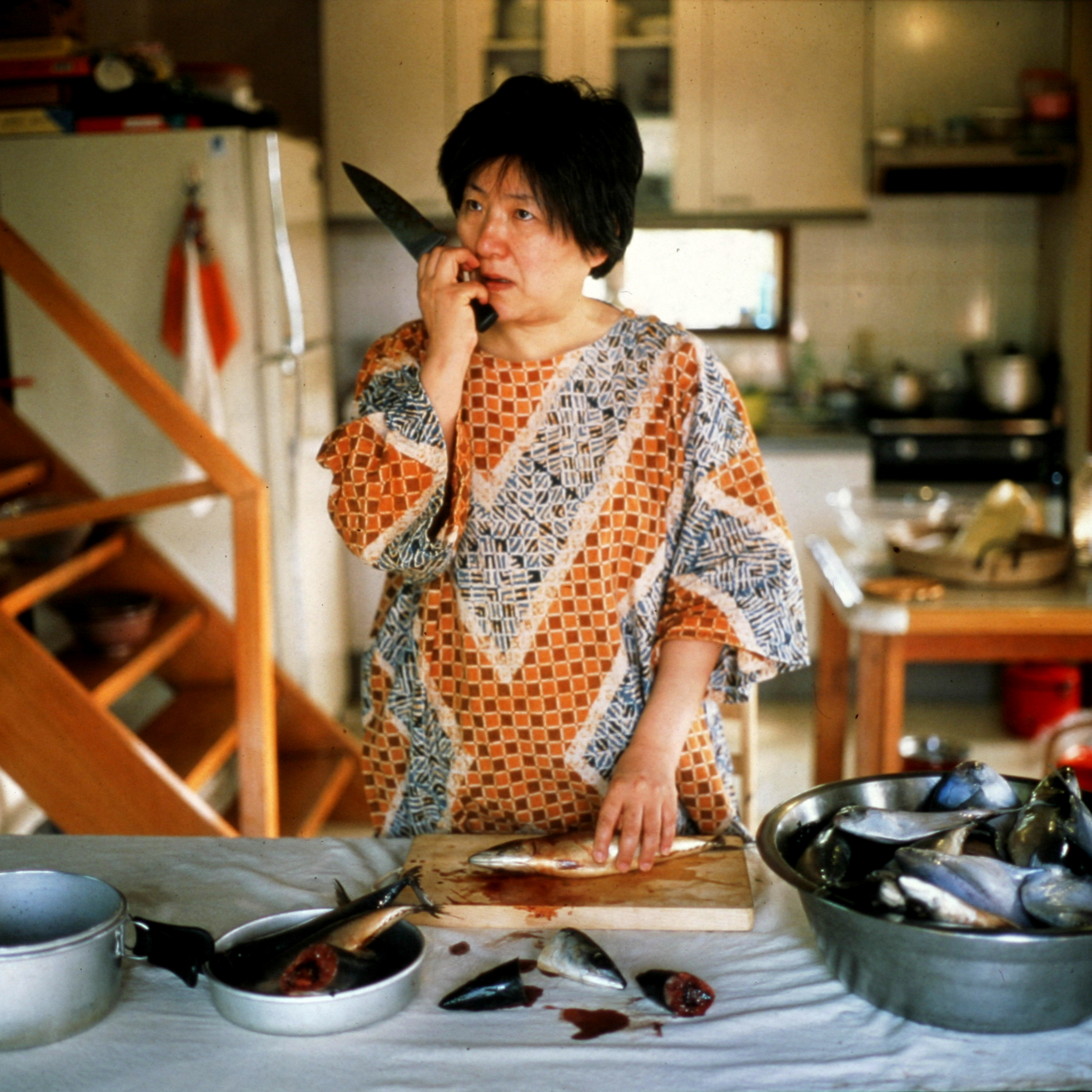 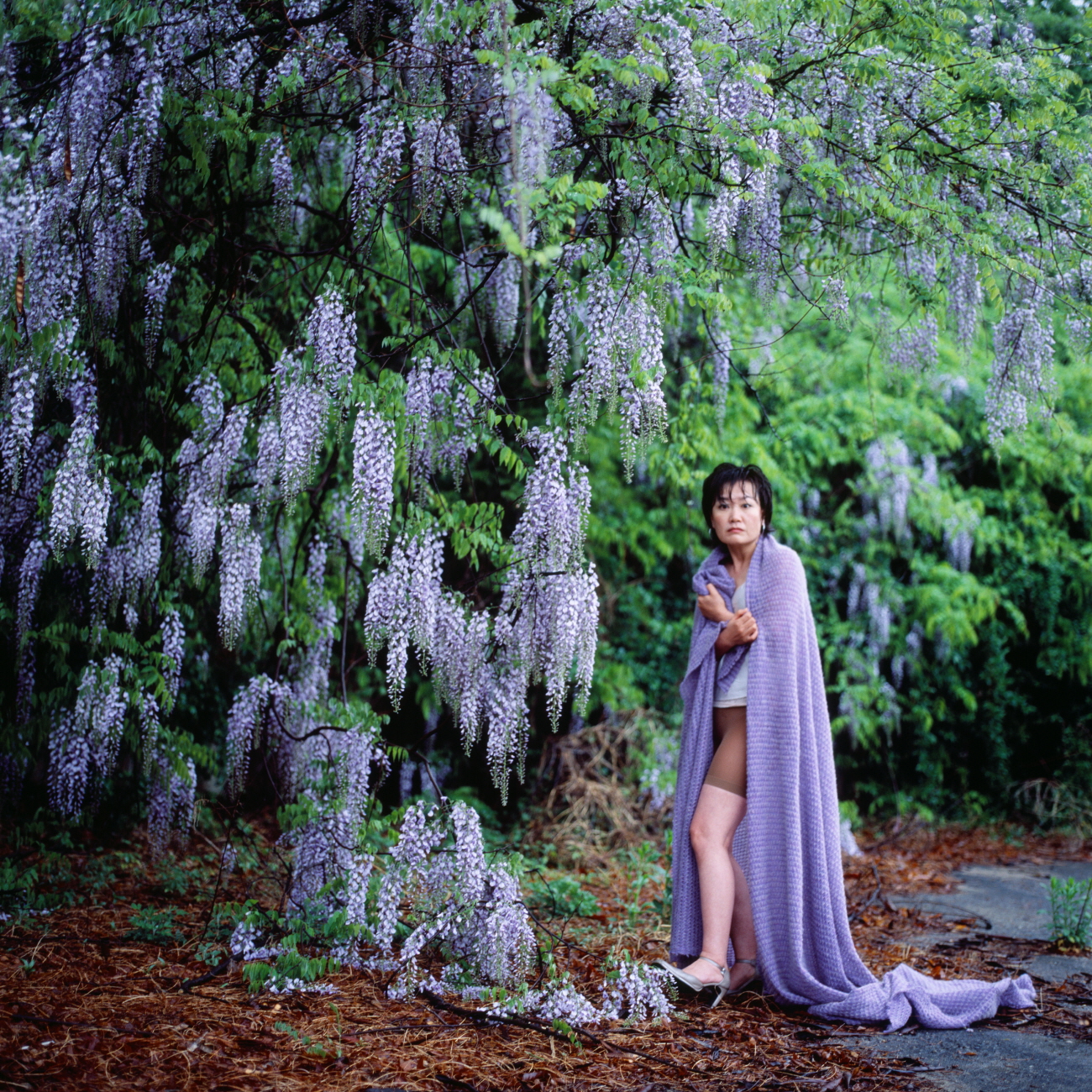 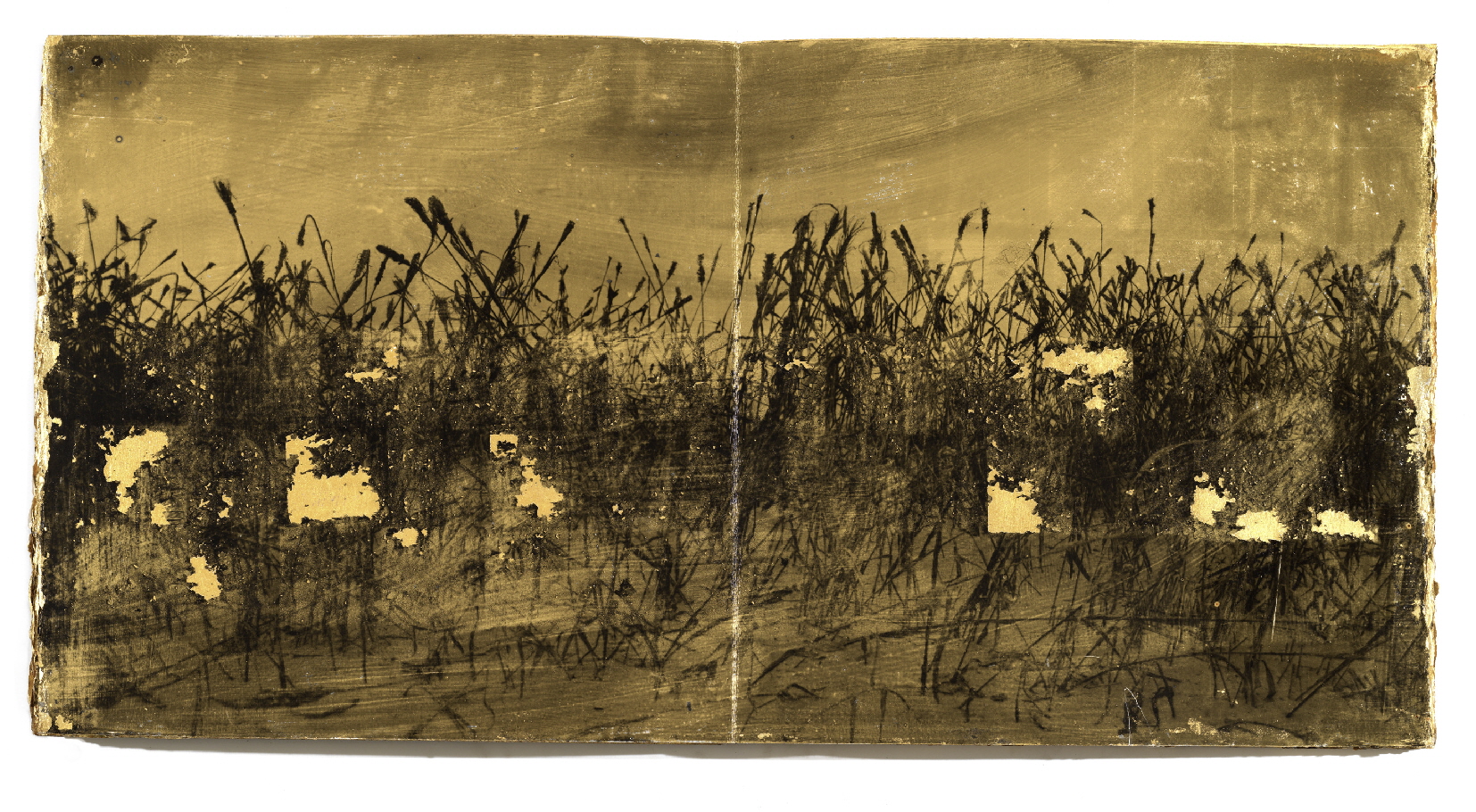 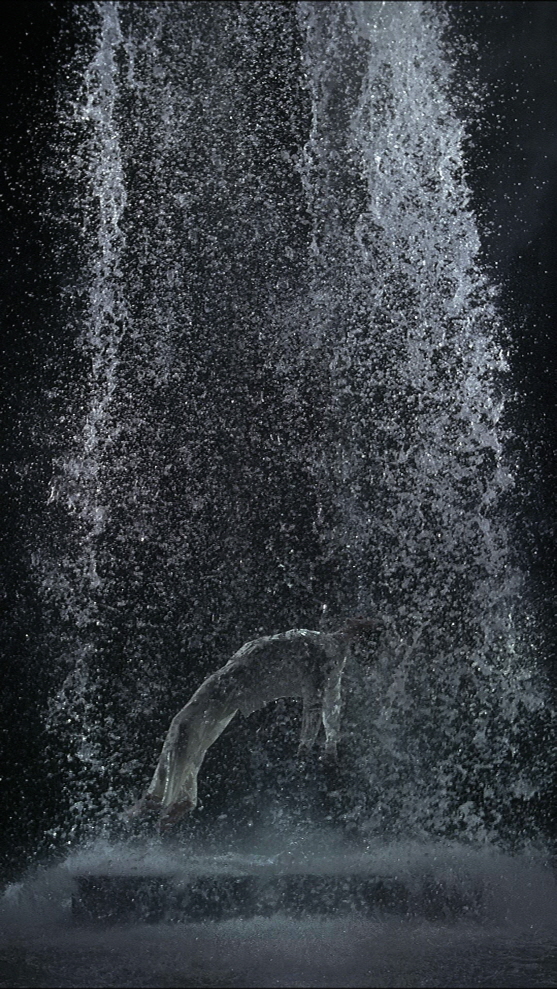 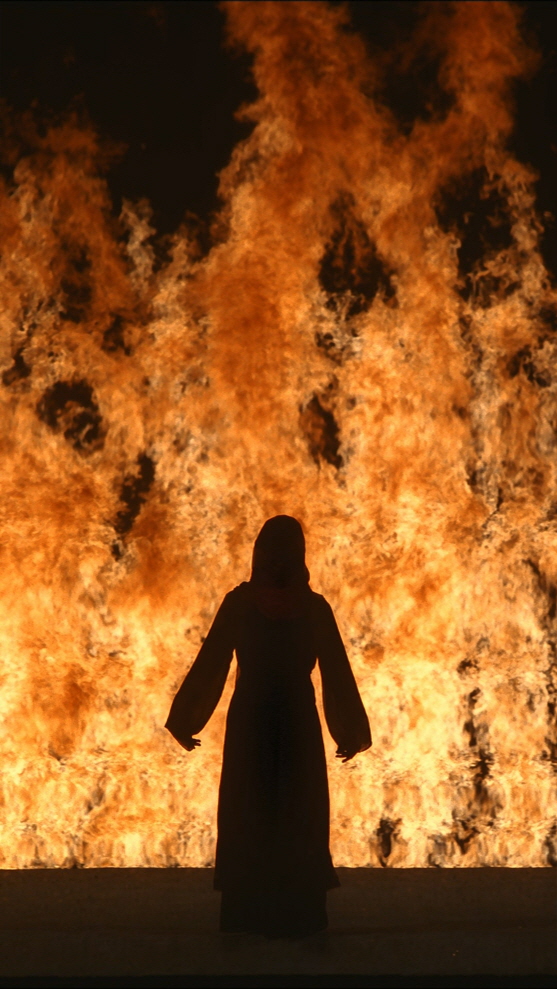 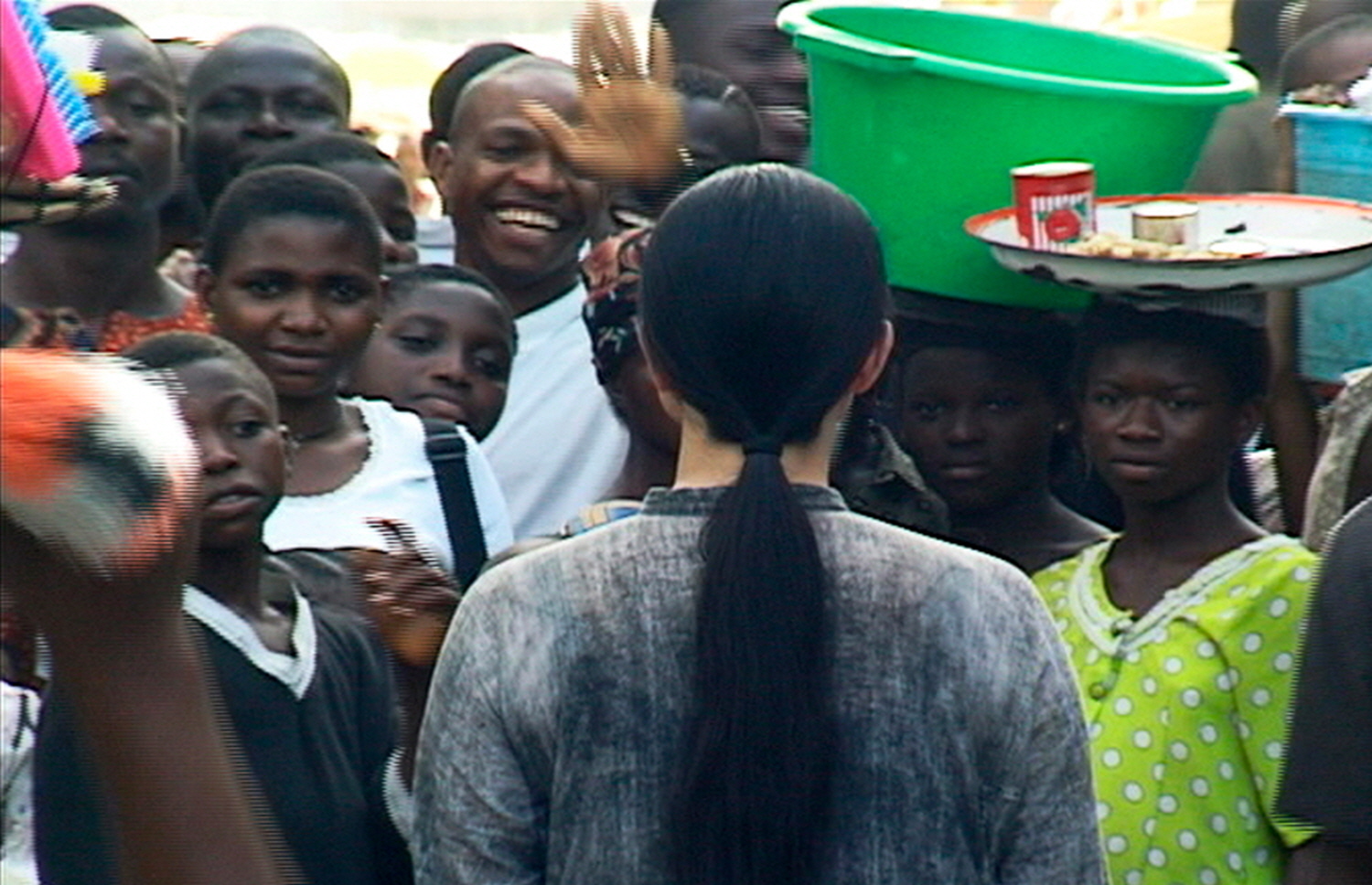 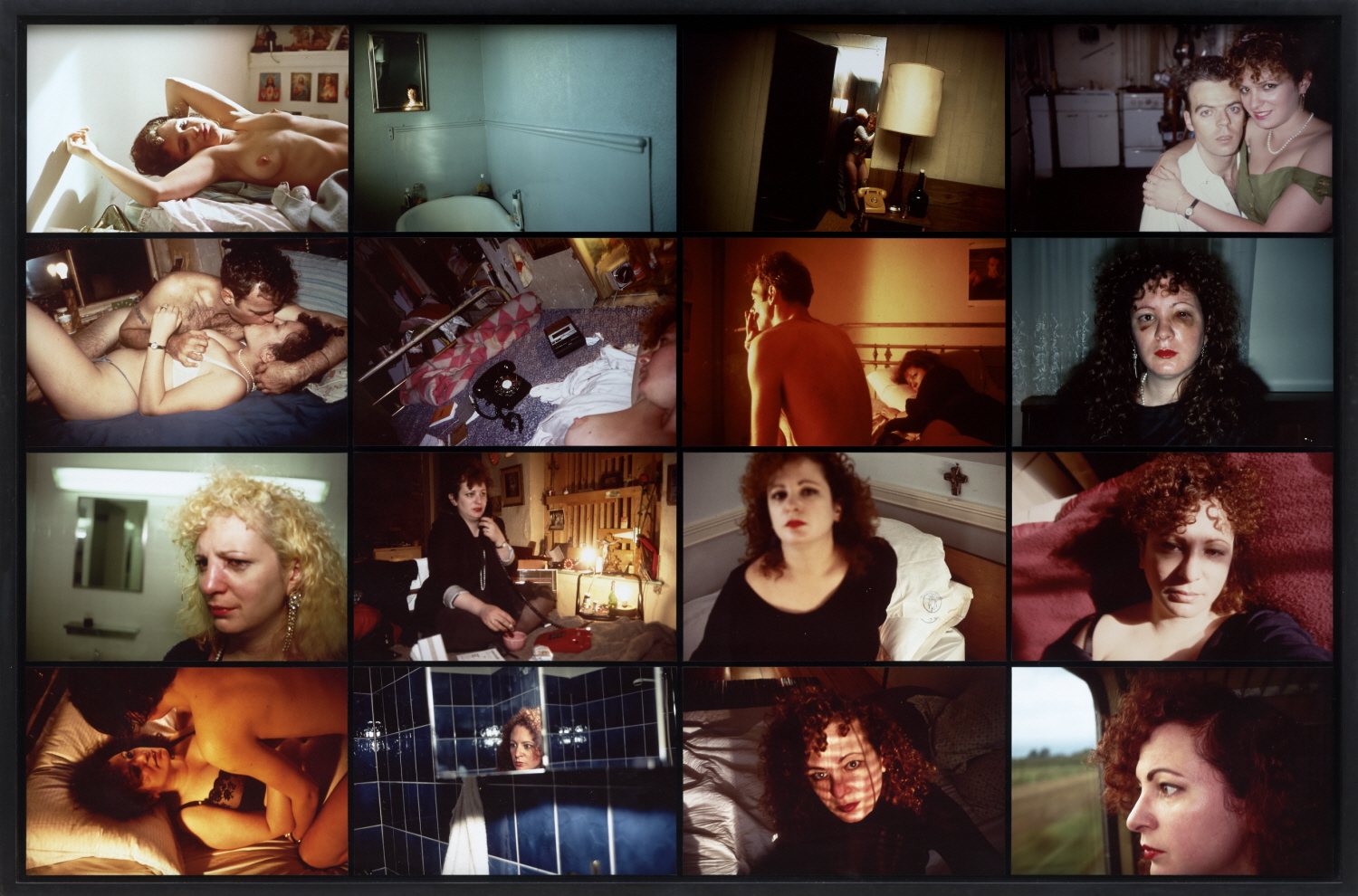 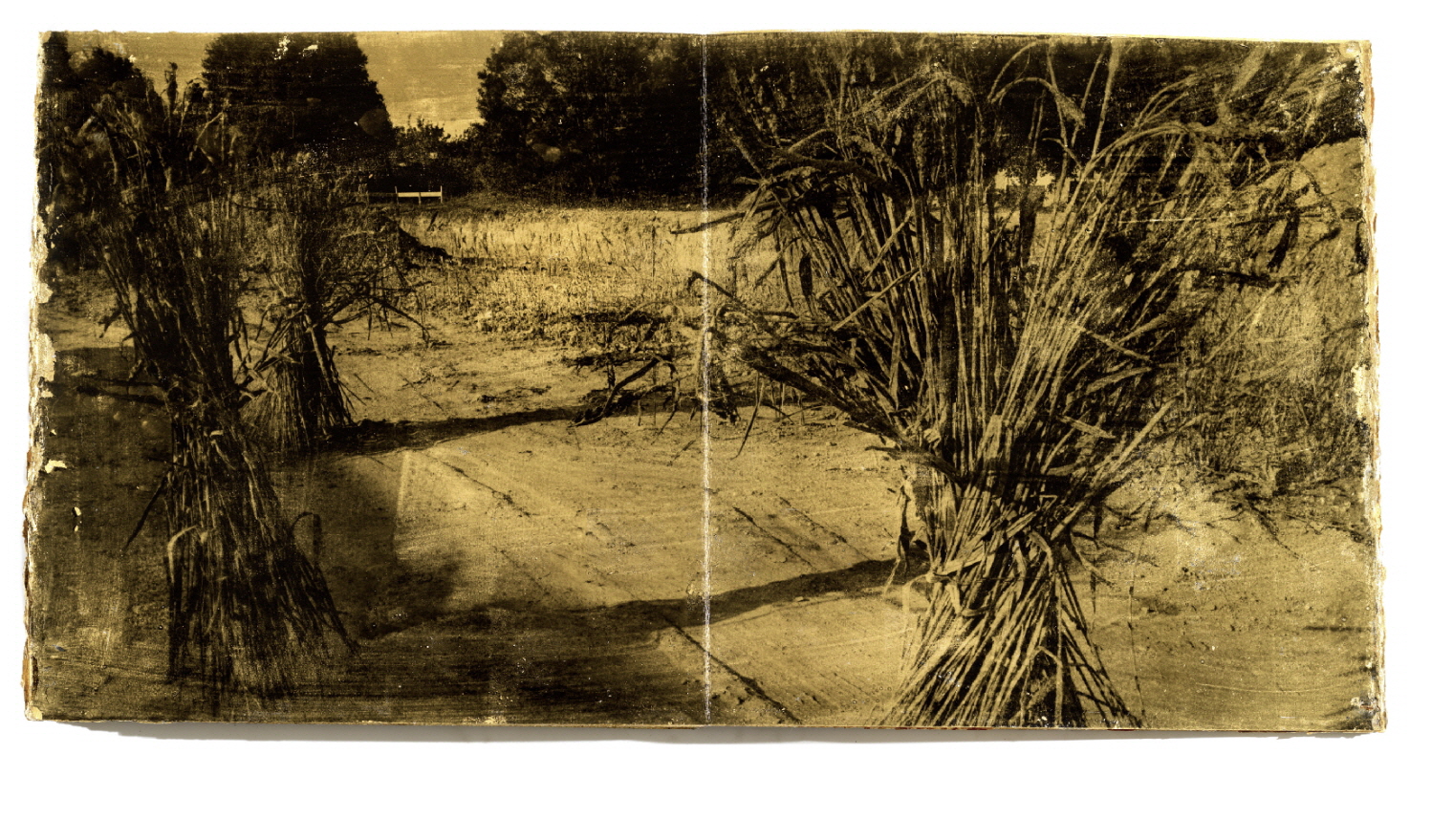 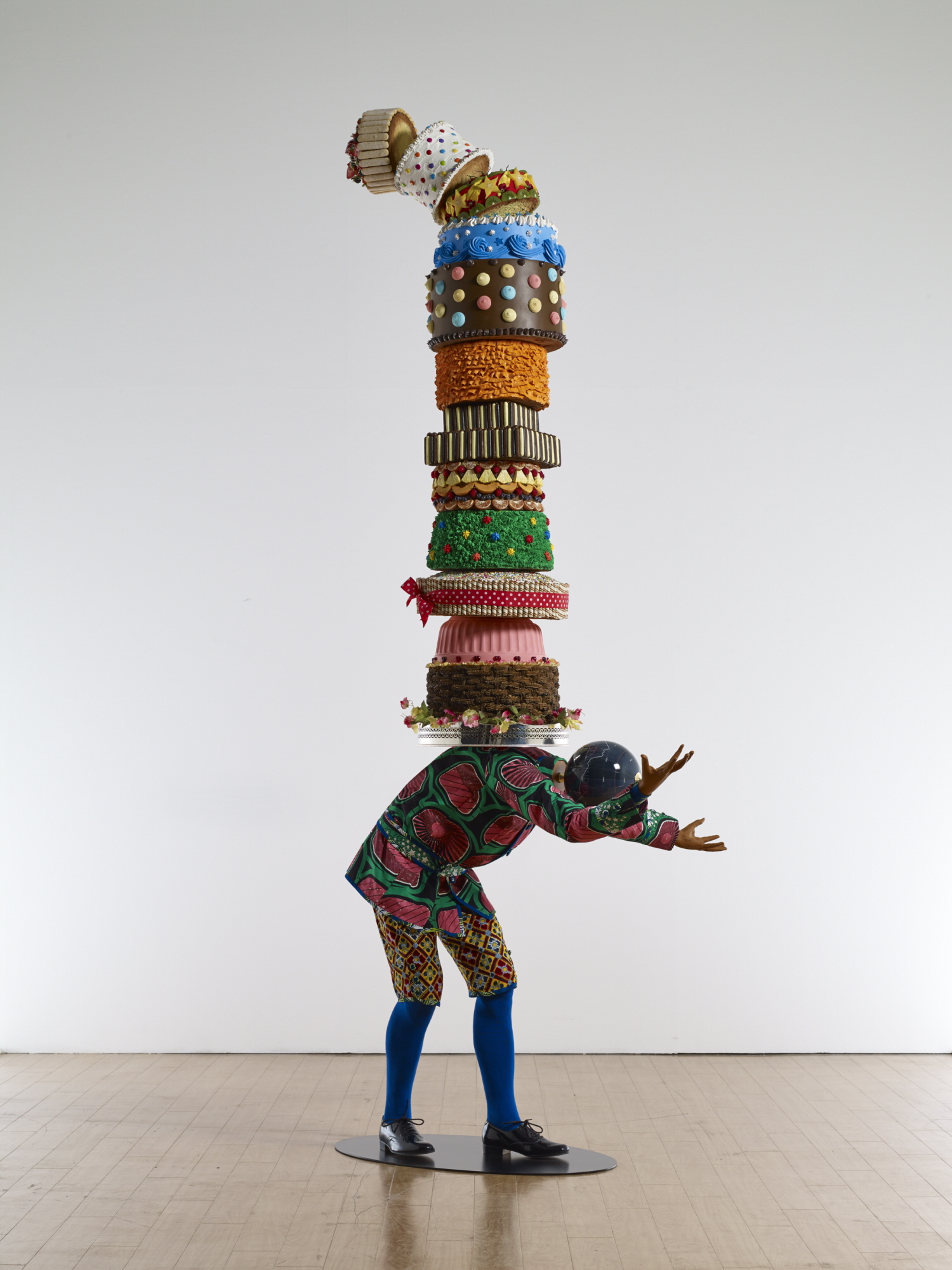